The Port of Ceuta reopens the city to cruise tourism. 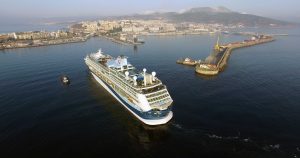 The Port of Ceuta established a joint health protocol together with the Government of the Autonomous City for cabotage cruises with port of calls in Ceuta.

Ceuta continues with the processes to reactivate cruise tourism in the city. The Governing Council approved the health protocols established jointly with the Port Authority for cruises from other national ports. This is the first step for the reopening of the Autonomous City to the cruise market, which will allow the ship calls following all the indications to protect passengers and citizens against COVID-19.

The action protocol approved by the Government determines the way in which the crew and cruise passengers will make the calls and it also establishes the requirements to guarantee health security inside and outside the ship. The measures will only be valid for ships coming from other national territory, since the restrictions imposed by the Directorate General of the Merchant Marine that prohibit the entry of international cruise ships will continue in force. In the same line, passenger ships with an exclusively national itinerary that start, end or make calls at the port of Ceuta must follow the prevention and control procedures specified by the City to minimize the risk of transmission of the SARSCoV-2 virus.

According to this new framework, the crew must present three negative PCR tests before boarding and respect a period of preventive isolation. Besides, cruise passengers must have a negative PCR to be able to board and will attend a talk on the ship in which the prevention measures and the protocols that must be followed on board will be explained.

In addition to this, the ships will have laboratories enabled to carry out tests on crew members and cruise passengers who will also have a medical insurance policy that guarantees hospitalization if it was necessary during the itinerary.

Likewise, the capacity will be reduced to 60-70% of the total, reserving cabins for preventive isolation of any of the passengers. Furthermore, meals cannot be a buffet, but will be served directly at the table. Outside the ship, controlled excursions can be made in the cities where there is a port of call, maintaining the distribution and the formation of “bubble groups”.

All the measures adopted follow those published by the “Junta de Andalucía” with the aim of establishing a common framework regarding health protocols in the area. With this step, Ceuta joins other cities that have already begun the procedures to open their ports to national cruise routes.