The giant cruise “Sapphire Princess” returns to make a second call during this month in the Port of Ceuta on Wednesday 28th August 2019. 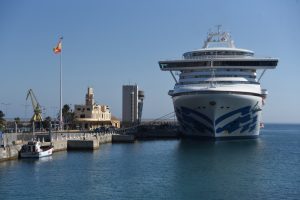 The cruise, which belongs to the shipping company Princess Cruises and consigned by Salama y Cía., will be in Ceuta from 07.00 to 16.00 hours. It is one of the largest ships that berths in the port of Ceuta with a length of 288 metres and a draft of 8.5 metres.

Around 4,000 people, including tourists and crew of different nationalities, will be able to visit the city and its surroundings.

The Port Authority of Ceuta informs of the arrival on Wednesday, August 28, 2019, of the giant cruise “Sapphire Princess” which, consigned by the company Salama y Cía., will be berthed from 07:00 pm and 16:00 pm in the Muelle España (east side). The cruise will arrive in Ceuta from the port of Alghero (Italy) and it will depart for the port of Southampton (U.K.).

This giant vessel has already made a call in our port , it’s the second time during this month, the last one last August 06th and it belongs to the prestigious shipping company Princess Cruises which trusts once again on the Port of Ceuta with this new port of call; which confirms the interest of this shipping company in considering the port of Ceuta in the routes of its cruises.

The size of the “Sapphire Princess”, with 288 m in length and 8.5 m in draft, made it one of the largest tourist cruises that had berthed so far in the port of Ceuta, with similar features as the cruise “Arcadia” or “Aurora” that visited us last year.

The ship “Sapphire Princess” has 2,970 passengers on board, most of them British and American and around 1,100 crew members of different nationalities, who will have the option to take the usual tour around Ceuta and do their shopping during the time they remain in the city. For that reason, the Tourist Services of the Autonomous City of Ceuta will collaborate in the reception of tourists, displaying in the berth area, a tourist information point. Apart from that, shuttle buses and transfers will be available for them to visit the city centre.

This cruise carries out a tour of 14 days of sailing visiting the ports of Cádiz, Barcelona, Marsella, Livorno, Civitavecchia, Alghero, Ceuta, and return to the British port of departure, Southampton.

With the arrival of this new cruise, the positive result of the commercial efforts that the Port Authority has been carrying out during these last years is confirmed, both in the international forums and in the participation in associations for the promotion of these traffics, and all this completes the number of calls and visitors for the benefit of the tourist and economic sector of the city.