Ceuta receives its first cruise after the pandemic. 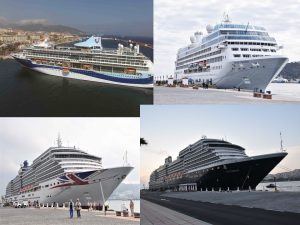 The cruise, which belongs to the shipping company “Grand Circle Cruise Line” and consigned by Salama y Cía., will be in Ceuta next Tuesday, 28th September from 7:30 a.m. to 23:30 p.m. It is a vessel with a length of 100 metres and a draft of 3.2 metres.

Around 160 people, including tourists and crew of different nationalities, will be able to visit the city and its surroundings.

The Port Authority of Ceuta informs of the arrival on Tuesday, 28th September 2021, of the cruise “Clio” which, consigned by the company Salama y Cía., will be berthed from 07:30 pm to 23:30 pm in the Muelle España (east side). The cruise will arrive in Ceuta from the port of Seville and it will depart for the port of Gibraltar.

This cruise, smaller than those that usually berth in our port, is the first to arrive in Ceuta after more than 16 months of interruption in the transit of cruises due to the pandemic. This is the first of the three calls planned by Grand Circle Line in Ceuta. There are three other calls planned for other shipping companies up to the end of the year.

The cruise ship ‘Clio’, with a length of 100 m and a draft of 3.2 m, is small in size, although it is significant that it adds two more calls in the port of Ceuta this year, on 10th and 18th October.

About 150 people on board between passengers and crew

The ship ‘Clío’ has a capacity for 100 tourists, most of them Portuguese and Americans, and around 50 crew members of different nationalities, who will have the option of taking some of the usual tourist tours in Ceuta and they can go shopping during the stay in the city. From 08:30 in the morning, tourists will be able to get off the cruise ship, either independently or to take part in excursions organised by Tourist Services, which will not have the usual information point following the rules against COVID-19.

Preventive measures against Covid force this cruise ship to have only 70% of its capacity. It is for this same reason that, although they leave our city at 23:30 p.m., cruise passengers must be back on the cruise at 9:00 p.m. maximum.

This ship has the following itinerary, since it left Portimao (Portugal), on 24th September, calling in Seville, Ceuta, Gibraltar, Malaga, Cartagena, Valencia and Barcelona, ​​where the ‘Clio’ voyage ends on 3rd October, when it makes the return voyage, so it will visit our port again on 10th October.

As usual, being the first cruise ship visit, a commemorative plaque will be given to the cruise captain, a brief meeting at the pier, respecting all the preventive measures against COVID in outdoor spaces.

With the arrival of this new cruise ship, good news is confirmed for the port, as the cruise ships are beginning to resume part of their normality by making calls, as evidenced by the arrival of the ‘Clio’, a normality that other ports such as Malaga or Barcelone are already taking. With the arrival of this new cruise, the positive result of the commercial efforts that the Port Authority has been carrying out during these last years is confirmed, both in the international forums and in the participation in associations for the promotion of these traffics, and all this completes the number of calls and visitors for the benefit of the tourist and economic sector of the city.

Features of the cruise “CLIO”