‘Adventure Zero’ makes a port of call in Ceuta before starting its voyage around the world for the fifth centenary of the Magallanes-Elcano expedition. 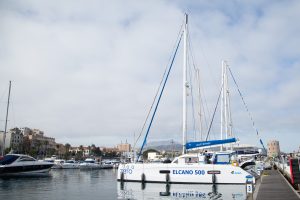 The captain of ‘Adventure Zero’, Jimmy Cornell, aims to be the first to complete the world tour in a fully electric powered boat.

The boat ‘Adventure Zero’ arrived this morning at the marina. The writer and navigator Jimmy Cornell is going to start the-world trip on this yacht to commemorate the fifth centenary of the expedition initiated by Magellan and Elcano, the first completed circumnavigation of the earth. The Elcano Challenge, name of the project, will begin this November 2020 and its completion is scheduled for August / September 2021, reproducing the voyage of the 1519 expedition, with calls in the same places.

One of the main novelties of this adventure is that the catamaran is 100% electric, without any type of combustion engine, so the navigation and the duration of the voyage will depend largely on the weather conditions. The ship was built in the south of France and is on its way to Seville, where the National Commission of the V Centenary is waiting for and from where the route around the world will begin.

During these days of navigation, he has taken advantage of his passage through the Strait of Gibraltar to make a port of call in our port and charge the batteries, since the boat has been sailing for several days in calm in the southern Western Mediterranean and without movement it cannot be recharged out of port.

This symbolic voyage consists of completing the historic route of the first round the world trip in a fully electric powered boat. The project, part of the list of official commemorative events of the V Centenary of the First Round the World Trip, is called “Elcano Challenge” in recognition of the first sailors who managed to complete this feat. However, the organizers also wanted with this name to represent the growing concern for the environment (Electricity. Carbon, NO!).

The project manager, Jimmy Cornell, is an experienced sailor, author, and nautical event organizer, who has sailed more than 200,000 miles in all the world’s oceans, including three circumnavigations, as well as trips to Antarctica and the Northwest Passage. The captain is also the author of 16 books on nautical matters, some of which have been translated into several languages: French, German, Spanish, Italian, Hungarian and Japanese.