The Port Authority of Ceuta organizes a conference to present a study based on the tax advantages that Ceuta offers to bunker operators. 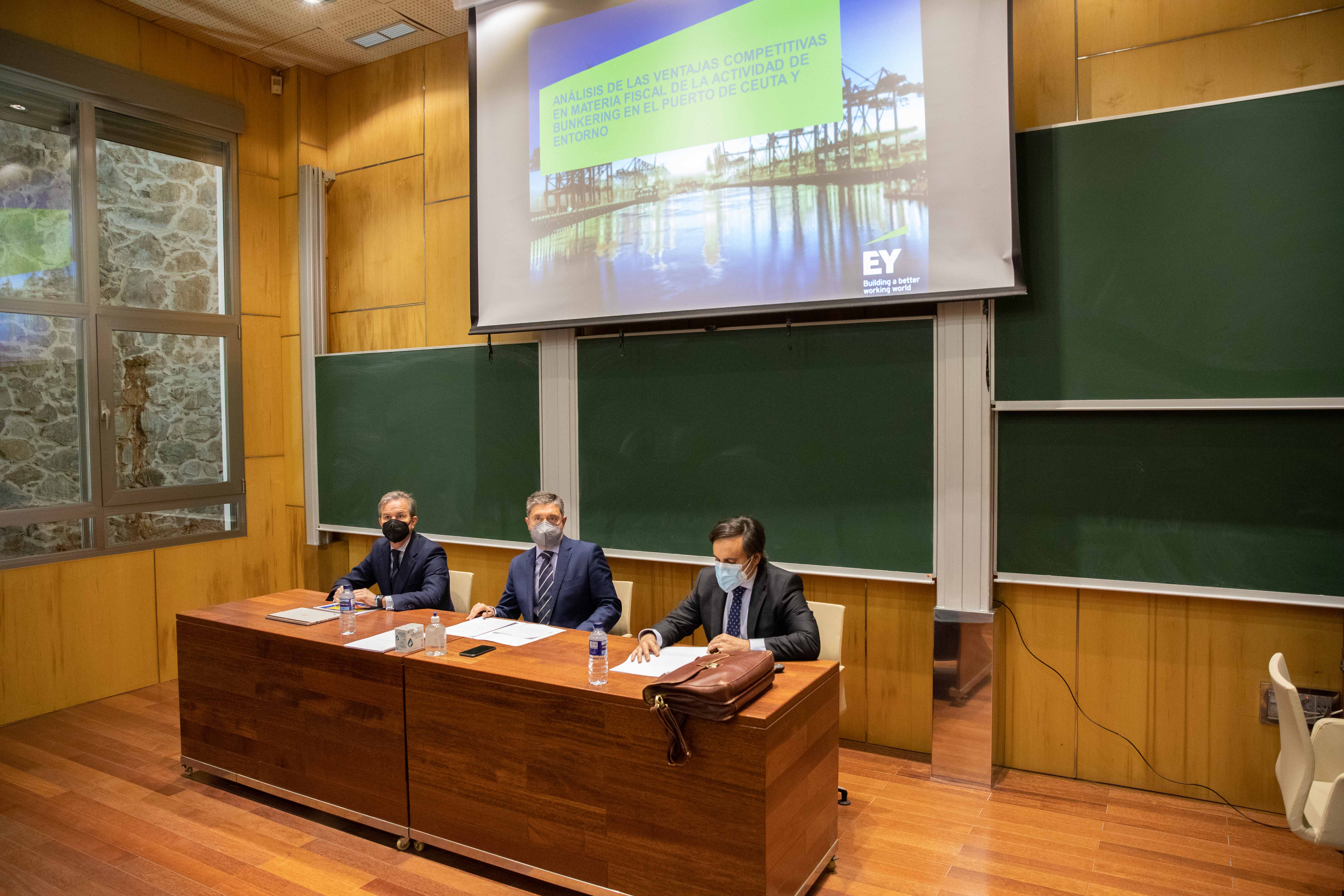 To explain this analysis, the entity counted on the presence of Alberto García Valera, manager of “Ernest and Young” in Andalusia and Extremadura.

The president of the Port Authority, Juan Manuel Doncel; highlighted the importance of planning joint actions between the different local operators so as to promote Ceuta as an attractive destination for bunkering operations.

The Port Authority of Ceuta organized a conference yesterday morning to present the study and analysis of the competitive advantages regarding bunkering activity taxes in the Port.

In order to explain this analysis, Alberto García Valera, as an associate of the aforementioned company “EY Spain” and former Minister of Finance, Industry and Energy of the Junta de Andalucía, offered the results on how the supply of fuel is essential to foster the economy of a city, for which the use of local resources is very important, highlighting the fundamental role of fuel supply for the economy of the autonomous city. The event was held in the main hall of the Tourism School, with limited capacity, and had a total duration of two hours, in which, in addition to the planned presentation, the debate among the attendees was very interesting.

The meeting began with a presentation of the port reality of Ceuta, carried out by the president of the Port, Juan Manuel Doncel. During this time, he talked about some of the competitive advantages Ceuta has compared to the surrounding ports. He also dealt with the importance of taking advantage of the benefits of the territory, such as its privileged situation or the consolidated experience in passenger, freight, traffic, and bunkering.

During his presentation, the president stated that bunkering is a tool that boosts the economy of Ceuta directly and also indirectly through other services thanks to the attraction of new companies to the city. He also highlighted that Ceuta is one of the main Spanish ports in terms of bunker traffic, constituting one of the main business lines of the local body and being one of the reference supply points in the Mediterranean. Its privileged geographical location, in the middle of the Strait of Gibraltar, through which more than 100,000 ships cross every year, provides Ceuta with a huge potential market.

For this reason, the president of the Port Authority of Ceuta explained that nowadays, regarding the plans of the entity, there are two lines of business which are a priority. On one hand, with regard to internal trade,we will continue with the Port-City integration, which is a project that began jointly with the Government several months ago. And, on the other hand, within foreign trade, the Port will continue to invest in the promotion of bunkering, as well as in strengthening new services and analyzing opportunities that benefit all the agents involved in the port community.

With this general image, Doncel gave way to the presentation of a study that was created to boost activity in the area of influence of the Port of Ceuta, to attract new investment and to plan joint actions between the operators and the Port Authority. A very important report because of the geostrategic location of Ceuta and its special tax regime to promote bunkering in the territory.

Apart from that, García Varela highlighted that Ceuta has the capacity, the infrastructures and the companies prepared for the supply and storage of fuel. For this reason, for the former politician it is necessary that all the operators have an impact on the benefits and strengths of the city, with special detail on the tax advantages that other sectors took advantage of, such as online gambling. In addition to this, he insisted on the need to trust in the local virtues and in the great possibilities of Ceuta within the bunkering sector.

These opportunities extracted from the study were compared with those of nearby ports. With all this, some of the business lines that Ceuta can currently take advantage of compared to other cities in the Strait were taken into account, such as offering Ceuta to those companies that operated from Gibraltar and that, due to Brexit, will be left soon if they want to continue trading within the European Union.

The event ended with a round of questions in which the representatives of the different operators were able to present their suggestions to the speakers. Among the attendees, the Port Authority wanted to invite representatives of the Confederation of Employers, Chamber of Commerce, Procesa, different ship agents, mooring services, waste collection, and especially the storage companies and fuel suppliers in the Port of Ceuta such as Dúcar, Vilma and Cepsa.

The high participation, despite the limited capacity due to sanitary restrictions, allowed conversations and discussions on the concerns of the different agents and on short and long-term solutions. Furthermore, the representatives of Cepsa and Vilma took advantage of this moment to ensure that their interest in continuing to work in Ceuta is maintained and they hope to increase their business figures in the future.

The Port of Ceuta considered this day a success, since it allowed to talk to different operators and the first steps were taken so as to advance together in the search for commercial opportunities in Ceuta.

Within the promotional plans, the Port also committed to carrying out a market analysis to study the possibility for the setting up of some new operators, seeking ways of collaboration with those already working today. Besides, if the sanitary situation allows it, it is planned to organize a conference on Ceuta during the next celebration of the IP Week (International Oil Week), taking advantage of the annual meeting organized by IBIA in London.

The port assures that it will continue working in this regard, fostering conversations so that members of the port community benefit from the suggestions and proposals and they move in the same direction.